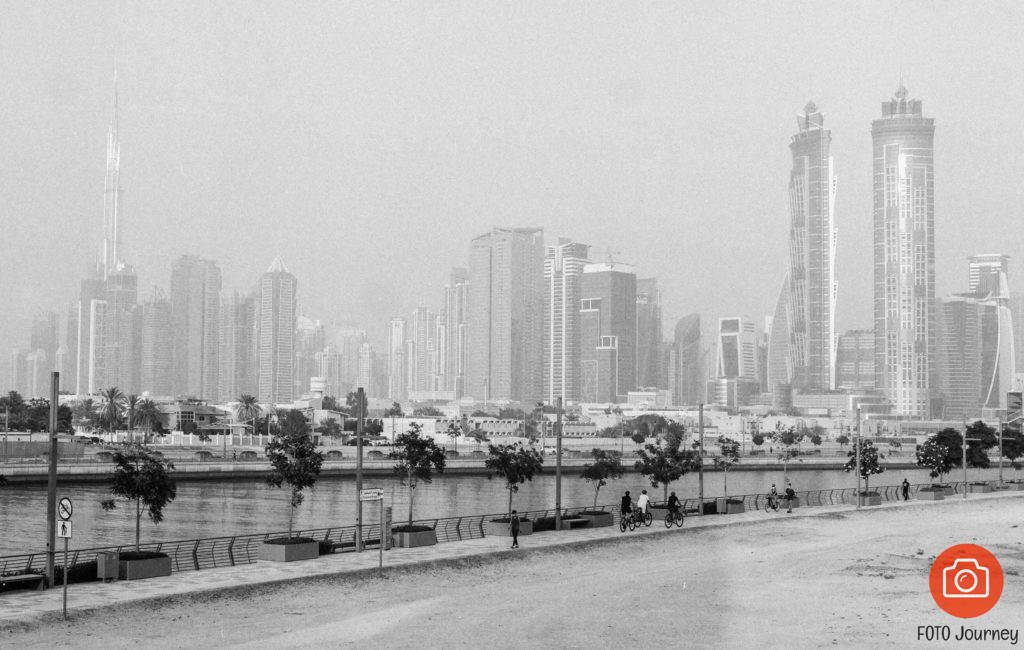 WhIle I was looking for a new B&W film for my Mamiya, I came on this Lomography Earl Grey 100 film. Basically, the Lomography Earl Grey is a classically-inspired black and white negative film. It is advertised as a fine grain and high sharpness film with a wide tonal range and ability to render deep blacks and stark whites, with a multitude of gray tones between.

Gray tones were exactly what I was looking for, and depending on how you rate the film, you are able to get more or less contrasty images. I shot two rolls of Lomo, rated at 100 iso on the mamiya. Lens is the 55mm f2.9, which is a 35mm equivalent in the 35mm world :-).

So, I took my camera during an afternoon walk along the Dubai Canal and try to get some shots. Even if the light was not at her best, with a lot of dust, and a strong sun, the images came out really nicely. I’m really happy with the tome I get from this film, really reflecting the reality.

The images above have cropped to a 16/9 size, just to give them a more cinematic look, but otherwise, the image in untouched. You really can see how the foreground is contrasty, while the background with the dust on there strong sun is more flat.

A week later, we went hiking in the mountain of Ras Al Khaimah (aka RAK). RAK is one the seven United Arab Emirates. Located in the north of the country, there are beautiful mountains, like Jebel Jais the highest UAE mountain. For this trip, I took the Mamiya 645 with a roll of Lomography Earl Grey. My goal was to take pictures of the mountains, with all the sediments layer.

This try was a mix feeling experience. While I was really happy with the pictures, I feel that I missed something. As previously, I rated the film at 100, but I might have try to push it at 400 to get more contrasts, especially on theses scenes.

In conclusion, I really liked using this film and I’ll try it again, pushed, to see how the contrasts are coming. I really gives this cinematic look that I like. Please find below a review of this film in 35mm by Active Capture and see how nice and contrasty the pictures are, well done guys.